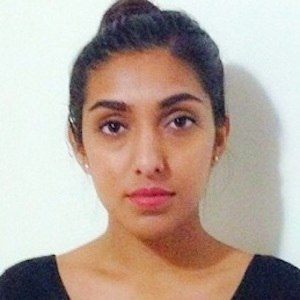 Canadian poet and spoken word artist who initially rose to fame on Instagram and Tumblr sharing her short visual poetry. After gaining 4.2 million followers on Instagram for her poignant verses, she released her debut poetry collection Milk and Honey.

She inherited her love of art from her mother and began drawing and painting at five years old. She continued her art into her teens, but at the age of seventeen began to focus more in writing and performing.

She released her second poetry collection, The Sun and her Flowers, in October 2017.

She and her parents immigrated to Toronto, Canada when she was a child. Her sister, Keerat, is an artist and singer and performed the song version of her poem “Milk and Honey.”

Social media has been such a big platform for my success. But it can also be a toxic place.

I always wrote stories, but I do remember a particular moment in middle school where I became passionate about essay writing.

I love Roald Dahl, Sharon Olds, Nizar Qabbani, who is a poet, and Junot Diaz.

I can go to all these cool places around the world, but when we land at YYZ, I’m like, ‘Yes! It’s flat. It’s concrete. I’m okay with this; my people are here.’