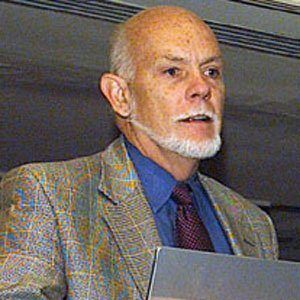 Physicist and astronomer who is considered the father of nanotechnology. He won the Nobel Prize in Chemistry in 1996 for his discovery of fullerenes.

He received his Ph.D. from Princeton University in 1973, after getting his B.S. from the University of Michigan in 1965.

He believed in Old Earth creationism, a view which ran counter to what many other scientists believed.

He was the youngest of four siblings.

He won the Nobel Prize three years before Ahmed Zewail.

Nature – how, we don’t know – has technology that works in every living cell and that depends on every atom being precisely in the right spot. Enzymes are precise down to the last atom. They’re molecules. You put the last atom in, and it’s done. Nature does things with molecular perfection.

In a way, cancer is so simple and so natural. The older you get, this is just one of the things that happens as the clock ticks.

After a few years of intensive research, we found a way to use a pulsed laser directed into a nozzle to vaporize any material, allowing for the first time the atoms of any element in the periodic table to be produced cold in a supersonic beam.

I was born in Akron, Ohio, on June 6, 1943, one year to the day before D-Day, the allied invasion at Normandy. The youngest of four children, I was brought up in a wonderfully stable, loving family of strong Midwestern values.