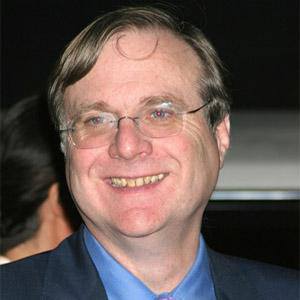 American investor and philanthropist who co-founded Microsoft. He owned both the Seattle Seahawks and the Portland Trailblazers.

He lasted two years at Washington State University, where he was involved in the Phi Kappa Theta fraternity.

He also founded Vulcan Inc and is part-owner of the Seattle Sounders FC.

His father Kenneth Samuel Allen was associate director of the University of Washington libraries. His sister Jody was also a businesswoman. He passed away from non-Hodgkin’s lymphoma.

He co-founded Microsoft with Bill Gates.

I was the center on our fraternity team, but I was a center-eligible, so I was known for my ability to go out, and I was pretty sure-handed catching a pass in the flat about ten yards down the field. My father played high school football and was pretty good. He also played center, so I always relished the idea that we both ended up playing center.

There’s a whole different way to express yourself in music and the other arts, and it hopefully complements other things you do in technology.

To make real progress in A.I., we have to overcome the big challenges in the area of common sense.