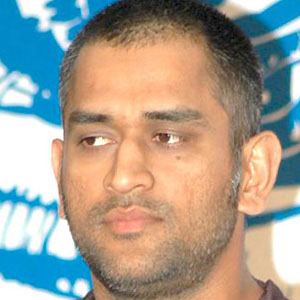 He was a standout soccer goalkeeper and badminton player before finding success in cricket. He made his ODI debut in 2004 and his Test debut in 2005.

He is a four-time ICC World ODI XI winner and a two-time ICC ODI Player of the Year Award-winner. In 2009, he led India to its first number one Test ranking.

His full name is Mahendra Singh Dhoni. He married Sakshi Singh in 2010. He has a daughter named Ziva.

He surpassed Sourav Ganguly’s record for most Test wins as Indian captain.

Sometimes in T20, you need to bowl only one over, and once the captain has given you that one over, irrespective of whether it is good or bad, that one over is out of the equation. That actually helps you, that one over. By the time the batsman figures out what you are trying to do, you get rid of one over.

For me, fielding and running between the wickets are two things that are very important. For that, you need to motivate the guys about how much of an effect it will have on the game.

I’m quite used to playing with few injuries, whether it is back, fingers, elbow, or something else. You have to be tough and get on with the game.

After the first ball is bowled, it’s only chaos. What you are trying to do is you’re trying to manage the chaos. It’s not like a script that happens.

I am touched by the admiration and ovation I receive from CSK fans, which will always remain close to my heart.