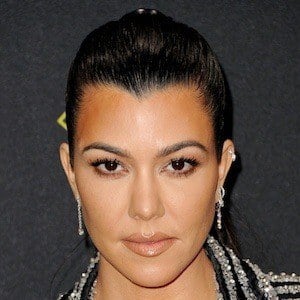 Oldest sister of Kim and Khloe who gained fame through her family’s reality series Keeping Up with the Kardashians and Kourtney and Kim Take Miami.

She graduated from the University of Arizona with a theatre arts degree and Spanish minor.

She first appeared on TV on the 2005 E! reality series Filthy Rich.

She had children Penelope, Mason and Reign Aston with former partner Scott Disick, whom she had an on-and-off relationship with since 2006. From 2017 to 2018, she dated model Younes Bendjima. She later began dating drummer Travis Barker. The two got engaged on October 17, 2021.

She is one of the three Kardashian sisters, and the daughter of late defense attorney Robert Kardashian and Kris Jenner.

Kids definitely grow out of their clothes really quickly, so I’m all about mixing and matching.

I called a bunch of the restaurants in my neighborhood that I had assumed served all-organic food, and so many didn’t!

I think motherhood is just about instinct.

I always had a love for kids’ clothes, but having your own kids is a better education for what is practical. I used to buy such crazy things for the store that were so much fun but not the most practical.

I know that, for me, I need to try to cover myself while breastfeeding so that no one snaps a picture. If this wasn’t the case, I probably wouldn’t mind as much because my son is my biggest concern. My attitude is, if someone sees a little somethin’ somethin’, don’t look if you don’t like it.