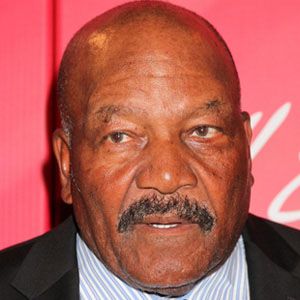 NFL Hall of Fame running back who starred for the Cleveland Browns from 1957 to 1965. He was a 9-time Pro Bowl selection and led the NFL in rushing 8 times.

He was an All-American in lacrosse during his time at Syracuse University.

He acted in a number of films after retirement, including 1988’s I’m Gonna Git You Sucka and 1999’s Any Given Sunday.

He had twins, Kevin and Kim, and another son with his first wife, Sue Brown. He married his second wife, Monique Brown, in 1997.

He led the Cleveland Browns to the NFL Championship in 1964, which would stand as the city’s last major sports championship until LeBron James led the Cavaliers to the 2016 NBA title.

It’s too bad about ‘Dark of the Sun.’ It was really about Tshombe. When I read the script, I thought it was going to be a political movie, and I thought we might even have a hassle. But the director simplified it to brutality and bad taste.

I would love to have a role with the Browns. I think that’s what every ex-player would like to do most of all: to be a contributor to the success of an organization that he was a player that brought a certain amount of success.

I don’t want football to not be played, but I would like the sophistication brought forth to take care of those who need to be taken care of and to take the precaution, at the sacrifice of winning, to take care of people.

I don’t start fights, but sometimes I don’t walk away from them. It hasn’t happened in a long time, but it’s happened, and I regret those times. I should have been more in control of myself, stronger, more adult.