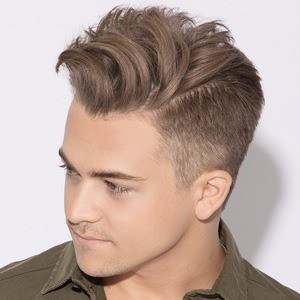 Country singer, musician, and songwriter who released the #1 singles “Somebody’s Heartbreak” and “Wanted” in 2011. He has also acted in films like My Dog Skip and The Apostle.

His musical career began at age four when he appeared on the Nickelodeon show Figure It Out to perform with Hank Williams Jr. He appeared on the show America’s Most Talented Kid at the age of thirteen.

In 2011, he released his first non-independent album, Hunter Hayes, which reached #4 on the US Country charts. He competed on The Masked Singer in 2020.

He is the only child of Leo and Lynette Hayes.

He sang a duet with singer and actor Victoria Justice for the 2011 film Footloose.

I’m from Louisiana, and that’s where I got my start, in Cajun music. There’s a huge music scene down there centered around our culture. Those are people that are not making music for a living. They are making music for the fun of it. And I think that’s the best way I could have been introduced to music.

I truly believe that when you’ve found the one you’re searching for, you become a better version of yourself. You’re better for it.

I grew up in a fun-loving environment – you work hard and play hard.

I was born with this love for music, and I say ‘born with’ because I don’t really remember a day waking up and deciding that I’m going do to music. It’s been all I’ve ever done and all I’ve ever wanted to do.

Every demo I do has a mandolin or resonator on it – some element of the bluegrass or classic country world that I grew up listening to and that first drew me in. And then I always try to find somewhere for a bluesy guitar sound, because that’s also what I love. Musically, I’m always finding my way home.