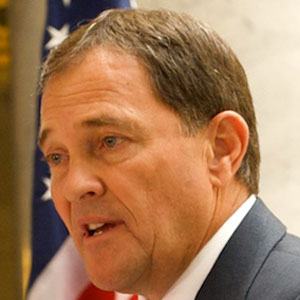 Republican Party politician and, beginning in 2009, seventeenth Governor of Utah. From 2005-2009, he served as Utah’s Lieutenant Governor.

His marriage to Jeanette Herbert resulted in three sons and three daughters.

He served as Utah Lieutenant Governor under the gubernatorial administration of Jon Huntsman, Jr.

I don’t believe we have defined health care reform very well in this country.

Partisanship is not necessarily a bad thing. It leads to new leadership and new opportunities.

I do believe that the states have the right to make the definition of marriage, and each state can define it as they so choose through their elected representatives.

Don’t spend more than you take in. Control your debt. Empower the private sector. We have 50 states out there that are laboratories of democracy. Why are we not empowering the states to find solutions to our problems, particularly health care, as opposed to looking to a one-size-fits-all solution from Washington, D.C.? That puzzles even me.