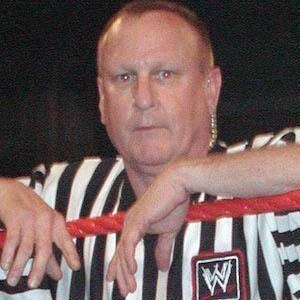 Professional wrestling referee who is known for his tenure with World Wrestling Entertainment. He began his tenure with the company in 1988 when he served as a referee for the inaugural WWF The Main Event show.

He began his officiating career in the early 1980s when he called matches for Jim Crockett Promotions. He served as a referee at the 1985 NWA Starcade event, which came to be known for the “I Quit” match.

He officiated the controversial “Montreal Screwjob” match in 1997 between Shawn Michaels and Bret Hart. In 2006, he joined the Total N Action professional wrestling promotion as a referee. His character has often played integral parts in the storylines he has been written into.

He was born and raised in Richmond, Virginia.

He changed the outcome of the 1997 WWF title match at the behest of his boss, and the CEO of the company, Vince McMahon, without informing Bret Hart.