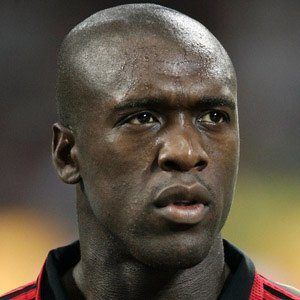 He began his soccer career in the Dutch settlement of Suriname and debuted professionally for Ajax in 1992.

He was a member of the Dutch national team from 1997 to 2012, helping the team reach the World Cup finals in 2010 where they were defeated by Spain.

He was born in Paramaribo, Suriname, in Northern South America.

A noted philanthropist, he was named the Nelson Mandela Foundation’s Legacy Champion for helping promote civil rights in 2009 after a personal meeting with Mandela.

Madrid is a club with very high demands.

What I strive for is that everywhere I go, I leave a positive impact.

Rijkaard was my idol, but we have different qualities, even if at the beginning we played in the same position.

I had a great time with Botafogo, and I am sure they will acquit themselves very well in the Libertadores.